Nearly a third of international flights that landed in Canada with passengers that tested positive for coronavirus upon arrival between March 3 and 19, were from Delhi, data sourced from Health Canada showed. A total of 98 international flights arrived in the North American country during this period, of which 30 were from Delhi, and of these, 21 were operated by Air India and nine by Air Canada.

Of these 30 flights from Delhi, 21 landed in Toronto and nine landed in Vancouver. As of February 14, Canadian authorities compel flyers over the age of five to provide a Covid-19 negative molecular test certificate before boarding a Canada-bound flight. Pointing to “lacunae” in test reports, Air India said, “Air India as a responsible airline is strictly conforming to the rules and protocol laid down by different countries. Only passengers with Covid negative reports are being allowed to board international flights from any destination in India. Hence, Air India cannot be held responsible for any lacunae on the issue of passenger test reports”. Air India had come under fire from Hong Kong authorities as well last year for transporting passengers who tested Covid-19 positive upon arrival. Because of this, the flag carrier faced several 15-day ban from Hong Kong administration from flying into the city.

After New Zealand, will other countries ban travellers from India?

Few days ago, New Zealand announced it was suspending entry of travellers from India, including its own citizens. The move comes after New Zealand recorded 23 new positive coronavirus cases at its border of which 17 were from India.

•Flights from India, Pakistan and the Philippines banned for 14 days starting April 20 (midnight)
•Those who stayed there for more than 2 hrs also banned •21-day quarantine, with additional requirements: 7-day self-monitoring and day 26 test.

The reason is Frightening : a single flight from Delhi to Hong Kong has so far led to 47 imported cases (& counting). All were required to do pre-departure testing and all were tested upon arrival. Yet, most of the cases were detected in hotel quarantine (most detected on day 12). All 47 passengers on Vistara flight UK6395 from New Delhi to Hong Kong on April 4th have now tested positive for COVID-19.

What is the Problem Statement in all above scenarios ?

Each country has released its own travel advisory and the mandate is any passenger entering into the country should carry a “Negative Molecular Test Certificate”. That’s fine . So the passengers were screened in India, test reports presented by passengers were checked, cleared and passengers landed into those countries as well. They were detected Positive there during quarnatine phase .

There were reports that these are photo shopped reports too. If such is the scenario, how come airport travel desk teams are not trained ? Whose fault it is , not training them ?
Do these travel desk teams know whom to reach out if they need guidance while checking authenticity of the reports ?
Are they trained on reporting or getting travellers arrested immediately for submitting fake reports ?
Why should Brand India’s reputation be at stake when simple processes, protocols are not followed by Airlines Staff ?
Why don’t Airlines, Hospitality industry, Travel Agents etc undergo mandatory training from Accreditation Boards to equip themselves better ?
What is the solution for detecting such fake reports ? If solutions are available, why don’t Medical Labs introduce such checks , controls or systems to save the trouble for all ?
In the opening para of this post, Air India official said Air India is not responsible for the lacunae in the issuance of the Test Reports. How correct he is in making such a statement ? As an agency responsible for verification of such reports as its the norm of importing country, how can Air India wash off its hands like this ?

Indian Travellers are risking their lives as well as the lives of international population by resorting to these fradulent practices. But they get severely punished in foreign land for such violations too. Incidents like this will affect the Travel & Trade between the countries .

As Exporting Country, we need to have strong checks and balances to ensure that our Country’s Reputation doesn’t got for a toss like this in the global markets ! We know about the norms imposed by Importing countries and its our duty to ensure that all stakeholders are thoroughly trained, sensitised on all protocols.

Regulations or Accreditations ??? – beginning of a new conundrum 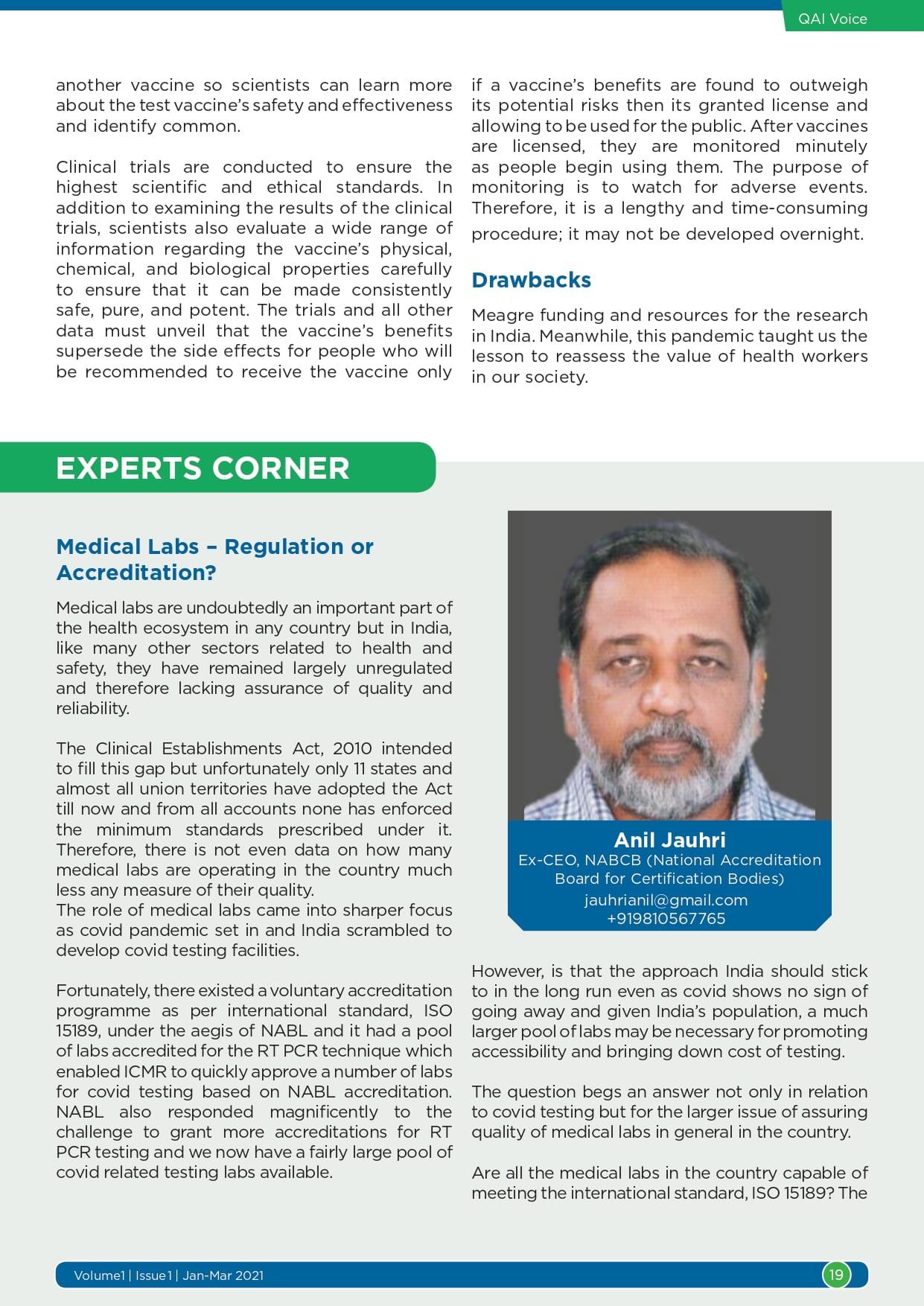 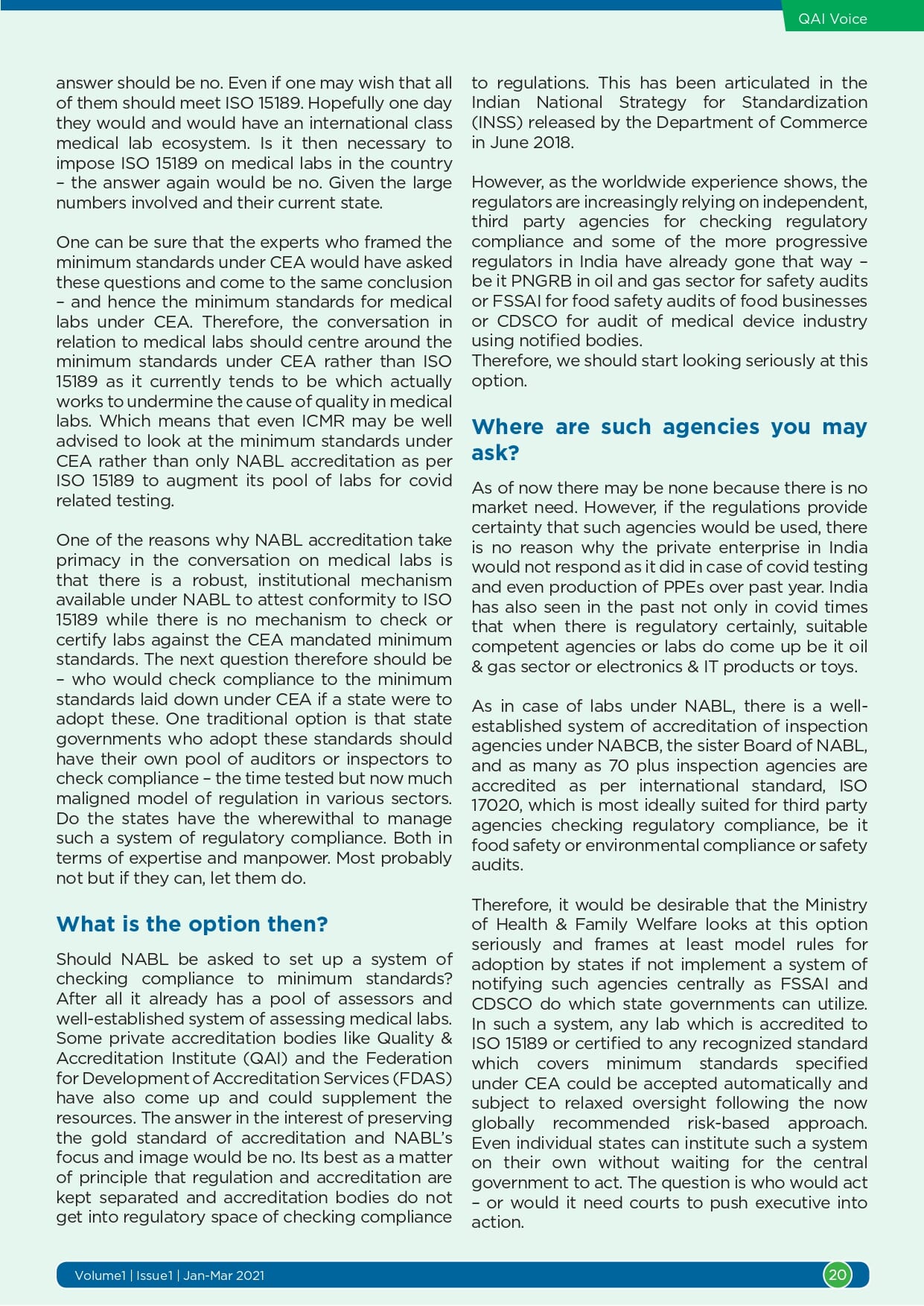 Medical Labs are undoubtedly an important part of the health ecosystem in any country but in India, like many other sectors related to health and safety, they have remained largely unregulated and therefore lacking assurance of quality and reliability.

The Clinical Establishments Act, 2010 intended to fill this gap but unfortunately only 11 states and almost all union territories have adopted the Act till now and from all accounts none has enforced the minimum standards prescribed under it. Therefore, there is not even data on how many medical labs are operating in the country much less any measure of their quality. The role of medical labs came into sharper focus as covid pandemic set in and India scrambled to develop covid testing facilities.The question begs an answer not only in relation to covid testing but for the larger issue of assuring quality of medical labs in general in the country.

Read the informative post by Mr Anil Jauhri, International Conformity Assessment Expert about Medical Labs and whether they need Regulations or Accreditations in the country .

Designation of Lab Director, a QMS Specification, becoming a HR Issue in the Laboratory

Isn’t this becoming a HR issue

This has triggered an internal discussion at office and we were debating about the need to create / insist on Lab Director’s designation / role in labs seeking accreditation.

Medical Labs were obtaining National / International Certifications, Accreditations all these years and each program has its own spec. However, the global trend in the last few years has shifted towards introducing Minimum Standards for Medical Labs and many countries have rolled out the program. India too has rolled out the Minimum Stds for Labs as Regulatory spec under Clinical Establishments (Registration and Regulation) Act, 2010.

Let’s take the case of a Lab appointing a Lab Director as an accreditation norm and see what is listed out by various National , International Stds for this requirement.

We have the following popular programs for Medical Labs running in our country :

Minimum Standards has mandated the Minimum qualification of Technical Head of Laboratory or Specialist or Authorized Signatories. Clearly defined spec on who should act as Technical head is mentioned. So any Certification program offered by NABL, QAI or any other body has to have the same spec in their Certification, Accreditation criteria as compliance to Minimum Standards is a Regulatory requirement.

ISO 9001:2015 Standard Clause 7 Support talks in general about Personnel competency, training needs etc. No other specification is listed as it’s a generic QMS Standard applicable for all businesses.

NABL’s Med Lab Accreditation Program mentions that Laboratory Director/ Head of Laboratory/ Technical Head (howsoever named), shall have the overall responsibility of Operations of the laboratory. Hence Lab Director’s Designation / Role is not mandatory. This is thee specific criteria document on NABL which is NABL 112. But the Standard for this program is ISO 15189:2012 which talks about the need to designate Laboratory Director.

My Thoughts as a Lab QMS Consultant :

I’m going back to the question asked by the Lab Professional whether its mandatory to have Lab Director Role and Designation in the Accredited Lab.

As a Consultant in healthcare industry, I would say it’s a debatable topic. The requirement depends on the National, International Standards followed by the Med Labs.

I have listed out the personnel spec given by each Standard for Med Labs. Lab Director’s Designation is a hierarchy in the organogram and can’t be maintained by all Labs. Labs can specify their own designations as listed in the NABL 112 Criteria OR criteria.

NABL Medical (Entry Level) Testing Laboratories {NABL M(EL)T Lab} Program is an entry
level program for medical laboratory under which laboratory shall be recognized for basic
routine tests based on the satisfactory proficiency testing (PT) performance.

The program is designed based on the Regulatory requirement called Minimum Standards for Medical Labs mandated in the Clinical Establishments (Registration and Regulation) Act, 2010.

This program is a basic Quality Assurance Program to encourage Labs to initiate Basic Quality / Minimum Quality Standards as mandated in Minimum Standards of CEA.

The amended version can be downloaded from here –

This is a Voluntary Certification program for Basic Labs in the country and is issued for one time with 3 years validity. Minimum Standards offer Minimum Quality specification and is the 1st step for any small lab to start with its Quality Journey.

NABL grants its accreditation to a Laboratory in the area of Testing (Medical and Other Categories) / Calibration / PT Providers / Reference Material Producers (as the case may be) for a specific period, specific scope, specific location and facility (subject to fulfilment of the requirements).

NABL has released an advisory and warning about unauthorised and false claims of NABL Accreditation at market place.